This is Ambika.
She and her daughter, Priya, worked as temple prostitutes in service to the goddess. That is until customers brutally murdered Priya. Ambika was consumed with grief and wracked with guilt. She should never have let her daughter entertain those men—but what choice did she have? After all, she was required to sacrifice her firstborn to the goddess or suffer the goddess’ wrath. She never imagined it would cost Priya her life.
Pain and loneliness suffocated Ambika, and the depression that crept in wouldn’t give room for peace or comfort as she cried into the late hours of the night. She couldn’t rid herself of the images of her daughter’s death, nor could she sleep them away. There was no one to turn to, and no end to her pain.

Then one day, Ambika met a TTI disciple-maker, who shared with her about Jesus. This God was different from the goddess Ambika served. As she heard the story of love, grace, and salvation she wept and surrendered her life to Christ. As she did, peace flooded her heart. While she still grieved the loss of her daughter, she was given new hope and purpose. She experienced freedom from fear and the grip the goddess had on her life; she walked away from her life as a prostitute.

The local church took Ambika in, cared for her needs, and have raised her up to be a disciple-maker as well.
Ambika still visits the temple.
Not to work.
Not to worship.
To witness.
She shares the Good News of Jesus Christ with temple prostitutes and has led four of them to the Lord! 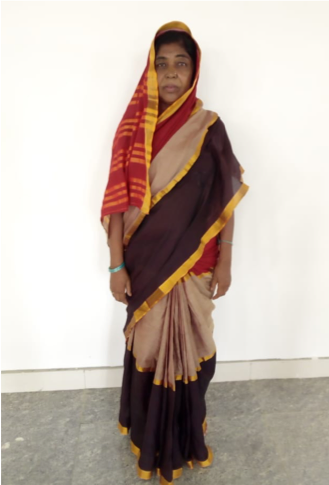 Ambika walked away from her life as a prostitute.