Suicide attempt on train tracks leads to a new life in Christ.

When her husband died, Sona thought life couldn’t get any worse. She was wrong. Not only was she left alone, with no income, but she discovered her baby had a heart condition. She underwent the necessary surgery, but the road to recovery was long and expensive. Without her husband’s income, there was no way to keep up with the mounting bills.  It was too much to handle—which brought her to the tracks. This was her only option; her only way to escape. 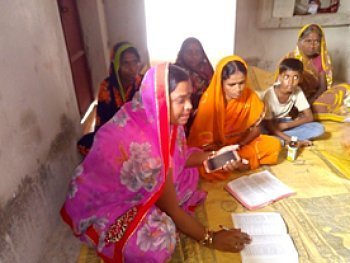 “I am filled with joy and will do His work until my last breath.”

Her thoughts were interrupted by the sound of footsteps approaching. Startled, Sona looked for somewhere to hide. With nowhere to go, she reluctantly lifted her eyes. Her gaze was met by a woman whose expression radiated kindness and concern. Sona fought back tears as the woman asked what brought her to the railway tracks. She sobbed gut wrenching tears as she recalled the heartache of the last year. “Please,” Sona said, “there is no hope for me. Just let me die.” The woman, a TTI disciple maker, shared with her the hope of Jesus. She spoke of life after death, and the choice of where to spend eternity. She ministered the love of God to Sona, and together, they walked away from the railroad tracks.

Days later Sona would return, but this time as a child of the King… and a railway employee! The very place she almost took her life became a place of provision and hope. “My Jesus give me hope,” Sona says. “I am filled with joy and will do His work until my last breath.”